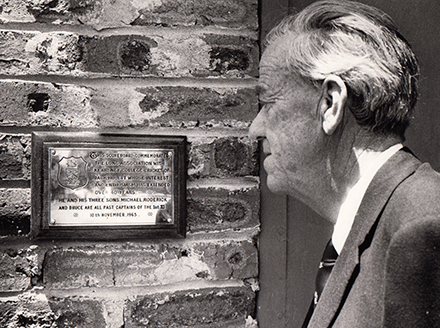 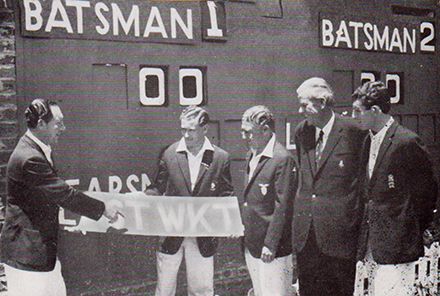 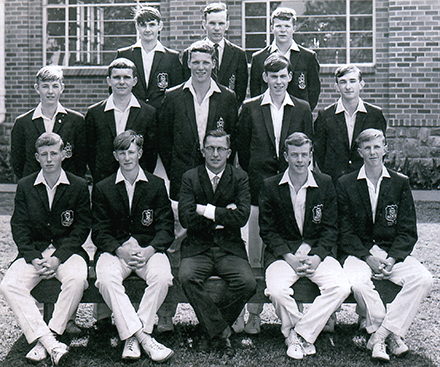 2015 marked the 50th Anniversary of the official opening of the cricket scorebox on the A H Smith Oval which replaced an earlier free-standing scoreboard.

The structure, which was built on a shoestring, was the handiwork of a group of staff and schoolboy assistants under the leadership of Ken Fish, an enthusiastic and highly energetic schoolmaster who had joined the staff in 1957. He laid the bricks during the Christmas holidays and the first weeks of his long leave.

Another staff stalwart, Dick Best, scrounged the door and windows, and persuaded Les Murdoch to build the face of the scoreboard.  After a reconnaissance visit to the dilapidated scoreboard at Kingsmead to see how the numbers worked, Best assigned Robin Blamey the task of making the boxes and roped in George Currin to help with the metal plates as his father had connections with an engineering firm.

Once the structure had been tiled the platform rigged and the boxes and number belts installed, the scorebox was ready for use.

The official opening was scheduled for Wednesday, 10 November, to coincide with the visit of the Wilf Isaacs XI. Classes ended at 10h20 and the boys and staff made their way down to the cricket oval.

After performing the opening ceremony. Hulett presented the school with a solid silver salver, carved with cricketing symbols, as a gift from himself and his sons. The trophy was to be awarded annually to the House providing the most cricket players for school teams.

The spectators were then treated to an entertaining match between the 1st XI and the visiting team which included South African test players Jackie McGlew, Roy Maclean and Gerald Innes, English test player, John Snow, and rising star, Mike Procter, who would later represent both South Africa and Rhodesia as one of the world’s quickest fast bowlers.

Kearsney posted a creditable score of 218 for 6 declared, with Allister Hipkin scoring a very commendable 148 not out. However, after Roy MacLean had notched up a century in seventy-five minutes, the visitors made 219 for 7 and secured a victory.