The first of our centenary events that we will be able to hold is the 18-hour ‘marathon’ reading of the New Testament on 09 and 10 March 2021. “Tolle Lege”. 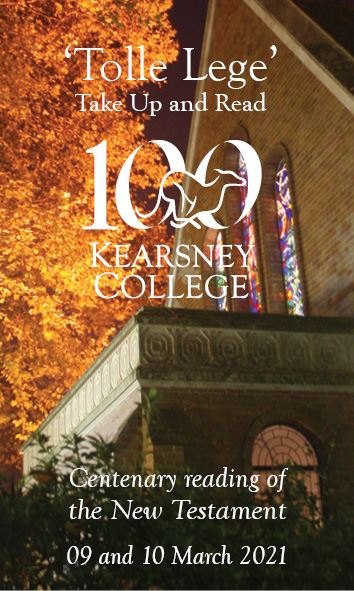 Centenary reading of the New Testament

In gratitude to God for 100 years of Kearsney College, and as part of our Centenary Celebrations, we will be holding a continuous reading of the New Testament. This special event will begin with an opening service on Tuesday 09 March and continue with reading through the New Testament until Wednesday 10 March 2021.

The reading will begin from 13h00 on Tuesday 09 March and continue over the course of 18 hours. Reading will be either in person, from the Kearsney College Chapel, or virtually via our online platform. Readers may read in a language of their choice.

The event will be live streamed and anyone is welcome to join us virtually. If you would like to watch part of the event via our MS Teams online platform, you can click on this link, which will go live from 12h45 on Tuesday 09 March and be available until approximately 07h30 on Wednesday 10 March.

Please join us as we meet God in the Scriptures.

The meaning of “Tolle Lege”: St Augustine told the story of how one day in his garden, he heard the voice of a child saying, ‘’tolle, lege’’, which is Latin for take and read. He was moved to open the Bible, and in those moments of reading the scriptures he committed his life to following Jesus.

The Kearsney Centenary is fast approaching and preparations are well underway to ensure a special year. The Centenary Committee has been meeting regularly since 2014 to plan a year-long programme to commemorate this significant milestone in style in 2021.

An exciting range of memorabilia will be available to commemorate the event.

The special events being planned for the Centenary include a Centenary Ball; a 24-hour inter-house sports challenge; a musical production which will chronicle the story of Kearsney through the eyes and ears of generations of Kearsney boys; a relay marathon reading of the New Testament in the Kearsney Chapel, involving the boys, staff, Old Boys, parents, churches and the wider community; an outdoor musical proms event featuring Old Boy musicians/performers in the line-up; the hosting of major sporting events on the SA schools’ sporting calendar; and much more.

The Centenary celebrations will culminate fittingly in a 140km Kearsney Epic Run – a relay run from the chapel at Kearsney College to the chapel at Old Kearsney, near Stanger, where the College started in 1921.

The South Wing of the Centenary Centre was completed towards the end of 2019. It provides the College with eleven additional modern and spacious classrooms and a beautiful courtyard, supplementing the four similar classrooms, the Centenary Arch and multi-purpose Long Room of the North Wing of the Centenary Centre, which was completed in 2016. Kearsney’s Centenary Centre was designed to provide world-class, state-of-the-art facilities suitable for collaborative 21st Century teaching and learning, in line with international best-practice. Academics are Kearsney’s number one priority and the development supports the College’s drive for academic excellence.

More details will be provided as they become available.

Answer Kearsney’s Call and join us on the Hill for the centenary celebrations. 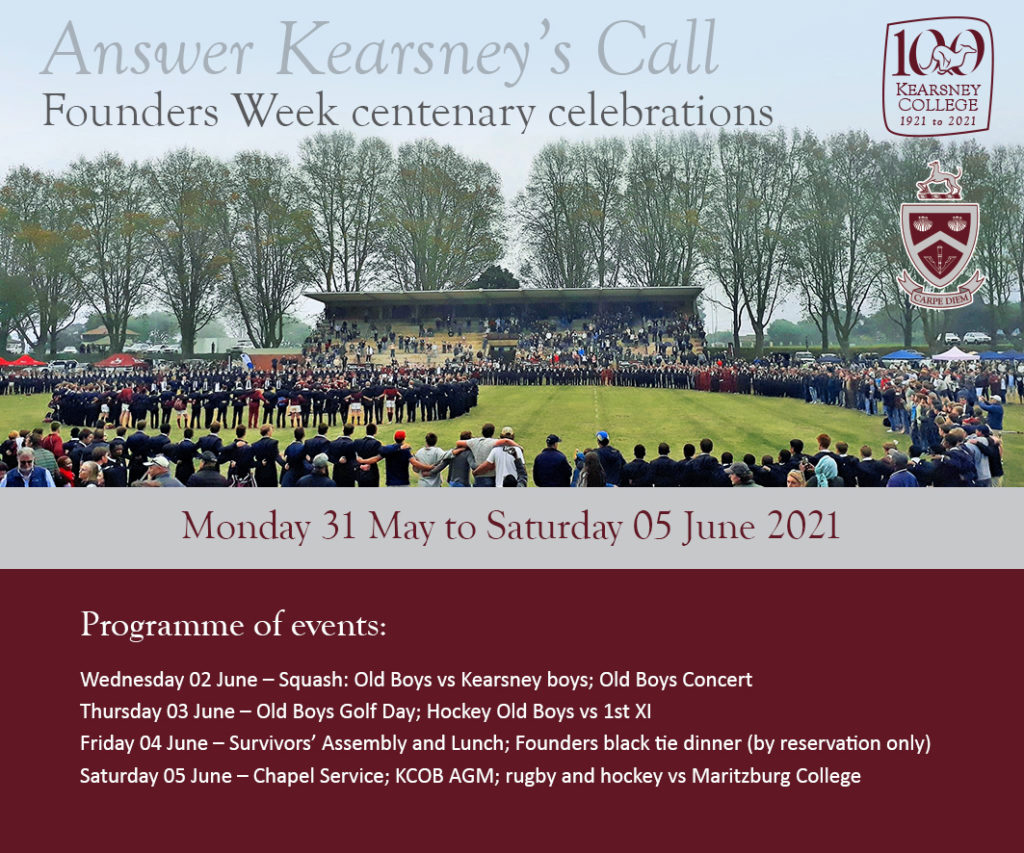 A beautiful coffee table book, rich in anecdotes and historical photographs, is in the final stages of being put together. This wonderful publication will provide an informative, interesting and entertaining record of the College’s first 100 years.