When our second Headmaster, R H Matterson, and the College chaplain, Rev. William Irving, discussed the design of a crest for Kearsney they opted for a simple but effective and distinctive design which would clearly reflect the new school’s connection with its founder and with the Methodist Church.

They selected a simple form of shield, known as a heater, and decided on the colour maroon and the metal silver as the College colours.

A chevron was used to divide the shield into two. The upper section would contain two cockle shells, emblems of St John and a prominent feature in the armorial  bearings of John Wesley  [the spelling is a variation of Wellesley] and in the crests of Kingswood College and many other Methodist institutions. It is said that medieval Christian pilgrims would often carry a scallop shell, and visit churches and homes on their journey, where they could expect to be given as much food as could be fitted into their scallop shells. In this way, even the poorest households were able to share with the pilgrims.

The lower section would enclose a pheon, an engrailed broad arrow, which features prominently on the crests of both Sir Liege Hulett and of Sydney Sussex College, Cambridge, Matterson’s alma mater.

The crest proper (as distinct from the shield) was adopted directly from Sir Liege’s crest and featured a greyhound.

It was decided that the motto should be succinct and easily understood, preferably encapsulating words with religious and scholastic undertones. And so the words of Horace (Quintus Horatius Flaccus), the leading Roman poet of the Augustan age, were chosen: Carpe Diem – often loosely translated as ‘Seize the Day’, ‘Seize the Opportunity’ or ‘Make the most of your opportunities’.

The following extract comes from Ode 1.11:

“… While we are speaking, envious life will have fled: seize the day, trusting the future as little as possible.”

Once the design was finalised, Pat Ellis (later Oram) prepared and painted a plaque so that the College crest could be displayed prominently in the dining hall.

On 26 June, 1958, William J Williams unveiled a newly completed panel on the academic block which would later bear his name. This included a fine ceramic rendering of the Kearsney College crest, the work of the Department of Arts and Craft of the Natal Technical College in Durban. It was decided at the time that this would become the official version of the College insignia.

It was almost forty years later that the crest was formally registered by the State Herald in Pretoria, mistakenly designating the colour of the shield as purple rather than maroon as both colours have the same designation in heraldic jargon. Maroon, incidentally, is said to signify ‘being patient in battle and yet victorious’. 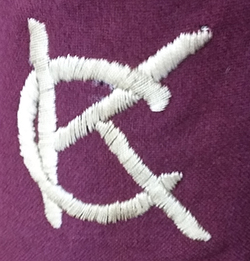 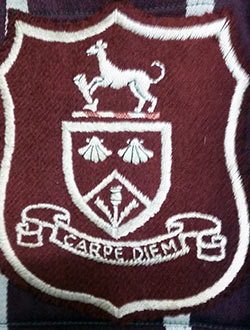 Prior to the introduction of a crest, the initials KC were embroidered on blazer pockets 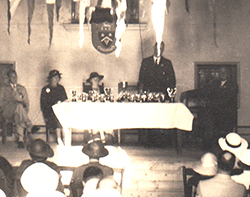