A Club for the mechanically minded

During the first part of Jimmy Hopkins’s headmastership, when the majority of Kearsney boys were full-time boarders who spent most weekends on the hill, a large variety of clubs and societies flourished. One such club catered for “that breed of person who would rather be involved with things oily and mechanical than sweating in a rugby scrum!”

Casual chats with Mathematics and Science teachers and fellow car enthusiasts Mike “Moose” Mossom and Roy “Whitey” Whiteford resulted in the establishment of the Kearsney Motor Club with its workshop in what is today the EGD block. Here Moose and Whitey patiently shared their knowledge and enthusiasm with a group of boys for whom age and seniority were not an issue.

Whitey, who had recently bought an Alfa Romeo, expressed his need for a simple runabout for short trips around Botha’s Hill. He placed an advertisement in the swap column of the Natal Mercury and succeeded in trading a Philips valve radio for a 1948 Wolseley 8 horsepower motor car in purportedly “just working” order, although the proliferation of rust and decay revealed the ravages of Durban’s humid climate.

“We set about stripping, cleaning and water papering the paintwork until our finger prints were worn off.”  Gaining the real privilege of permission to break bounds, the junior boys walked to Botha’s Hill Garage armed with 50c to buy a gallon of petrol to clean the parts of the vehicle. 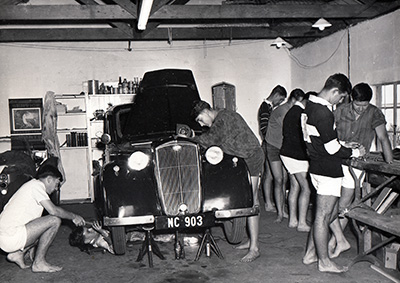 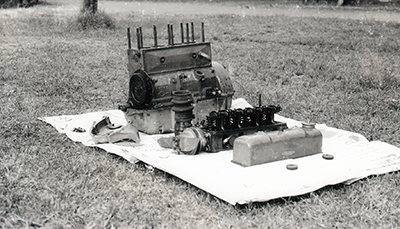 The engine, stripped for cleaning

On their return to their Houses, grimy-fingered Motor Club juniors had to rely on energetic scrubbing with Lifebuoy soap to ensure that they passed random fingernail checks before supper.

No Kearsney pupils were permitted to drive or ride any vehicle on the College campus. However, on one occasion, the peace of a balmy Botha’s Hill summer afternoon was disturbed by the rasping exhaust of a go-kart. This was being propelled by a Motor Club enthusiast across the open lawn between the swimming pool and the workshop where the SportZone now stands.  The boys did not think that the sound would carry to the administration block, where a staff meeting was in progress.

“Turn that damn engine off”

Suddenly, Whitey appeared. “Turn that damn machine off!” he yelled. Roy Whiteford was not usually given to swearing or using expletives. The crowd of spectators hurriedly vacated the area is if nothing happened. The punishment of those involved directly is unknown, but when the members were safely within the confines of the workshop to be reprimanded officially, Whitey was heard to say, “Not such a bad machine after all.” There was, however, a delay in the Wolseley restoration project as the guilty parties were banned from the club for a period.

A significant event took place during 1965 when the Veteran Car Club staged a Concours d’Élégance at Kearsney. This included a gymkhana event in the then vacant grassed area where the music, art and drama block now stands. Points awarded for fastest time and least mistakes. One activity required the car to be reversed into a “garage” space, the engine switched off and then restarted.  As most were vintage cars, the restarting of the engine relied on the passenger jumping out and rushing to the front of the car to crank the engine vigorously with a crank handle. As a volunteer for one of the visiting competitors, Moose leapt from the passenger seat and cranked as though his life depended on it.  He had almost expired when the driver discovered that he had forgotten to switch on the ignition. 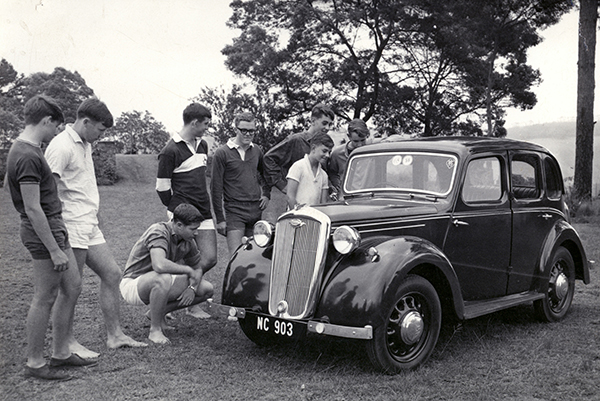 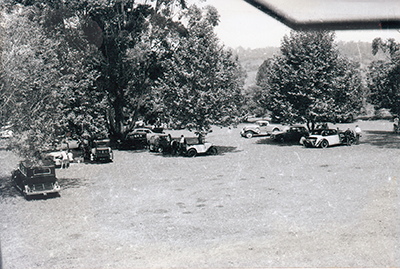 Occasional benefits accrued to other members of staff. A schoolboy mechanic performed an emergency repair to the exhaust system of Rob Blamey’s Ford Zephyr judiciously using coat hanger wire. The repair is reputed to have lasted for years!

During the years 1966 to 1969 Moose had a 1948 MGTC, the body of which he himself painstakingly restored, including the manufacture of the Ash timber components that formed the basic framework around which the sheet steel body panels were formed. Conveniently he was also the woodwork master whose workshop was in the same building as that of the Motor Club.

For a short period, Whitey owned a modified 1930s SS100 sports car which had been fitted with a Ford V8 engine. The only involvement of the Motor Club was the occasional polishing of the bright red bodywork and copious fettling of the chromed headlights and grille.

The Wolseley was commissioned

The restored Wolseley was commissioned and put into service early in 1965 and was used was used by Whitey on a daily basis for more than four years until it suffered “complete and utter mechanical failure” in late 1969. Scrapping papers were signed and the vehicle was taken off the road.

As the sole surviving founder member of the Motor Club, Graham Grant was offered the honour of taking over the remains of the Wolseley. After some negotiation by his father, a purchase price of thirty five rands was agreed upon. This included a car radio which was duly installed. Also included were parts from the second car. So Graham spent many hours during his matric year in the Motor Club workshop, removing the engine, stripping and cleaning components and taking stock of what was required. The basic engine components were railed to Johannesburg, machined and returned to Botha’s Hill with new pistons, rings and bearings. With generous assistance from Whitey and Moose, the engine was reassembled and reinstalled in the car.

He clearly remembers the first starting of the restored car: “being pushed into action by many members of the club, the engine firing up and being able to drive past the headmaster’s house, Whitey in the passenger seat and me at the wheel! Very irregular!”

The future of the Wolseley

After the final assembly in 1970 the Wolseley was loaded onto a flatbed truck, by using the retaining wall opposite the tuck-shop.  It was taken to Johannesburg where it became known as “Winnie” and served Graham for the duration of his studies at Wits.