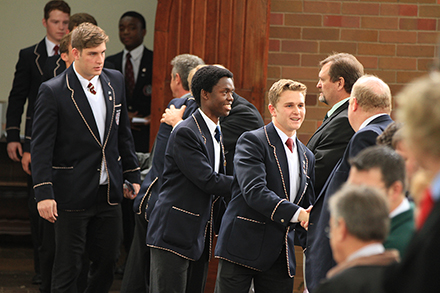 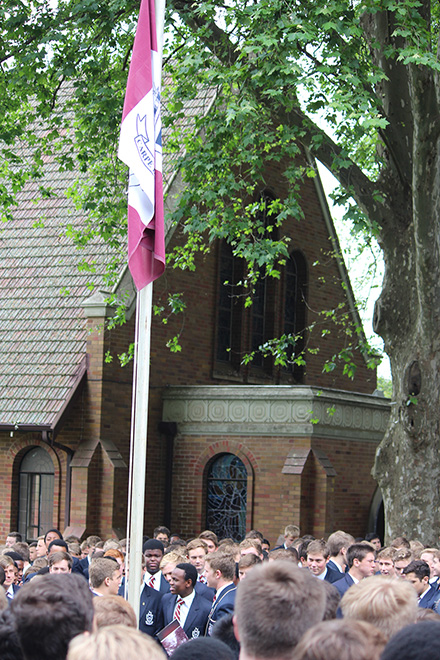 The final assembly has developed into a dignified and moving occasion commemorating the matrics’ last official day at school.

At the beginning of their final school assembly service the staff and non-matric boys, who are already seated in the chapel, stand up to receive the sixth formers. Led by the Headboy and Deputy Headboy, they process to the front of the chapel where rows of seats have been reserved for them behind the organ.

After they have been welcomed by the Headmaster, the congregation singsThere’s a Light Upon the Mountain, the school hymn which was originally chosen by Mrs Charmian Silcock, the wife of Kearsney’s fifth Headmaster. After this the Head of Chapel reads from the scriptures and the Deputy Head Boy leads the congregation in prayer.

An opportunity is then given for departing members of staff to address the school and this is followed by the choir singing the traditional Irish Blessing, “May the Road Rise to Meet You“, composed by James Edward Moore.

Thereafter the assembly is addressed by the outgoing Headboy and this is followed by the singing of the school anthem, Botha’s Hill, our Homeland. The lyrics have been taken from the first two and last two stanzas of a poem written by Kearsney’s third Headmaster, Mr Stanley Osler, entitled A Kearsney Song: L’Envoi to Sixth Formers. The music, composed in 2015 by Director of Music, Bernard Kruger, was inspired by and adapted from a melody composed in 1961 by the then Director of Music, Mr John Harper. Read the detail of the song’s history. See the first singing of the song at a Leavers’ Assembly (October 2015).

After this, the Headmaster formally announces the names of the incoming prefects and this is followed by an address by the Headboy Elect.

The congregation then sings E W Howson and John Farmer’s Five Hundred Faces, one of Harrow’s school songs which was introduced at Kearsney by our seventh Headmaster, Mr Elwyn van den Aardweg. The song is sung twice. At the beginning of the second rendition the Headboy and the Deputy Headboy lead the sixth form out of the chapel where the staff has already assembled in two lines between the chapel doors and the chapel lych-gate to bid them farewell. This tradition was also introduced by Mr van den Aardweg and is based on a similar practice at Boxhill School in Mickleham, Surrey described to him by Mr Dave Goldhawk who spent a term at that school in 2001. The school has no chapel but, at the end of the academic year, there is a service in the nearby Norman church after which the teaching staff lines up to say good bye to all of the pupils.