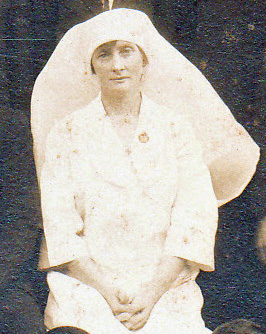 When Kearsney College opened in August 1921, the Headmaster’s wife, Mrs May Pyne Mercier, was appointed as matron. Shortly after the Pyne Merciers departed at the end of September 1922, Sister E M Edwards was appointed matron.

Whenever she was mentioned in school magazines or in the minutes of meetings, only her initials were given. So, who exactly was the person behind the name?

Information about Sister Edwards came from an unexpected source. She was one of the Australian nurses of the First World War whose life and wartime career was researched in 2013 by Monash University adjunct research associate, Janet Scarfe, of the East Melbourne Historical Society. This research has been used extensively in the following article.

Ernestine Mabel Edwards – known as Nesta – was born in 1883 in the mining hamlet of Snake Valley, near Carngham, some 30 kilometres from Ballarat in Victoria, Australia. She was the eldest child of Ernest George Edwards and his wife Marion (née Mark). The families of both of her parents had come to the goldfields in the 1850s, Ernest, at the age of 9, in 1855 from Ipswich, England, and Marion, as a 5 year old, in 1859, from Providence, Rhode Island in the USA via Liverpool.

Nesta’s parents married in 1882, but the family moved after her birth in 1883 as mining in the around Snake Valley and Carngham area had been declining for a decade. The family seems to have moved first to Geelong, where Nesta’s brother, Charles Frederick, was born in 1885, and then to Melbourne where a third child Arthur Lionel was born and died in 1885. At that time her father was employed by the Broken Hill South Silver Mining Company whose offices were in Collins Street.

In 1891, when Nesta was eight, her mother died. Nesta went to school in Fitzroy, inner Melbourne and won prizes in Form 5 (Grade 7). She then seems to have completed her education at Wesleigh College before training as a nurse at Melbourne Hospital in Carlton and then as a midwife at the Queen Victoria Home in Adelaide. 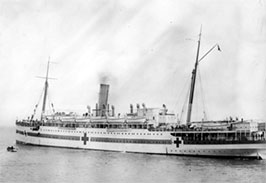 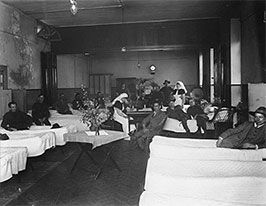 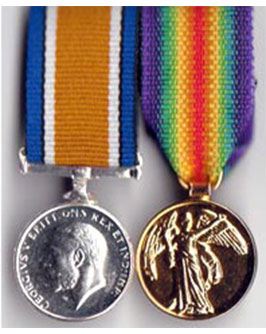 In the meantime, her father had taken a second wife, Emily Power, who, at the age of twenty-one was barely four years older than Nesta. It is quite possible that she did not get on with her stepmother as, by the time she had completed her nursing studies in 1914, Nesta was living in the suburb of Northcote with her uncle, Charles Frederick Edwards, and his wife, Bessie Jukes, a well-known Melbourne soprano and music teacher.

Staff Nurse Edwards enlisted in the Australian Army Nursing Service (AANS) in April 1917 and left Melbourne on the No. 1 Hospital Ship Karoola on the 21st of the same month. She disembarked in England on 17 June and three weeks later she was in war-torn France working at the newly-established 25th [British] General Hospital at Hardelot. She was attached to that unit until it closed in early 1919.

The matron, Adelaide Kellett, and nursing staff were Australian but the medical officers were English. Most of the hospital, which had 2 400 beds, was tented. It specialised in treating skin diseases such as scabies, psoriasis and eczema, though there were also medical and surgical cases. During an Allied offensive in August and September 1918, the hospital functioned as a casualty clearing station, its operating theatres in constant use day and night, although the work did not have ‘the glamour of dressing the large wounds’. One of Nesta’s colleagues, Sister Leila Brown, described it as a ‘dreary tented hospital’ buffeted by wind and sand in summer, then sandstorms and snow from autumn onwards.

Nesta nursed at that hospital until late October 1918 until she was transferred to Menen in Belgium to assist at the 3rd Australian Casualty Clearing Station (3 ACCS) which was critically short of staff. A week later she contracted the virulent form of influenza affecting some patients and was evacuated to the 3rd Canadian Stationary Hospital at Doullens in Picardie, France. This was her second bout of serious illness, as she had spent almost two months away from her unit from November 1917 with severe asthma – first at the 14th [British] General Hospital in Wimereux, which had a sick sisters’ hospital, and then in a convalescent home.

While she was recovering from influenza, hostilities ceased and the armistice was signed on 11 November 1918. As patients, nurses and equipment were gradually relocated to England, she spent a week’s leave in Paris in February 1919, shortly before the 25 BGH left for England. Nesta was finally and briefly attached for duty in March 1919 to the 2nd Australian Auxiliary Hospital in Southall, which specialised in amputees.

In June 1919 she was promoted to Sister and left England for Australia via Colombo, Sri Lanka on a commandeered former German liner, the Lucie Woermann. She disembarked in Melbourne on 25 July, and was discharged from the AANS on 15 October 1919. She was awarded the British War Medal and the Victory Medal.

While she had been away both her father and stepmother had died and her brother, Charles, had returned home to remote East Gippsland after he had been demobbed.

Aged thirty-six, single and with no family responsibilities, Nesta was a free agent. Why she chose to sail to South Africa in 1920 is not known. Perhaps she had nursed South African soldiers or met South African nurses. Or perhaps she thought the climate would be favourable for her respiratory health.

At the meeting of the school council on 2 October 1922, Sister Edwards’s appointment as matron at Kearsney College was confirmed. Her wartime experience would have stood her in good stead as would the fact that she was a Methodist.

Very little information has come down from the first years of the school’s existence and much of what we do know has been gleaned from the reminiscences of Sister Edwards recorded and later reprinted in the Kearsney Chronicle. In addition to her role as matron and school nurse, she produced end of year concerts. 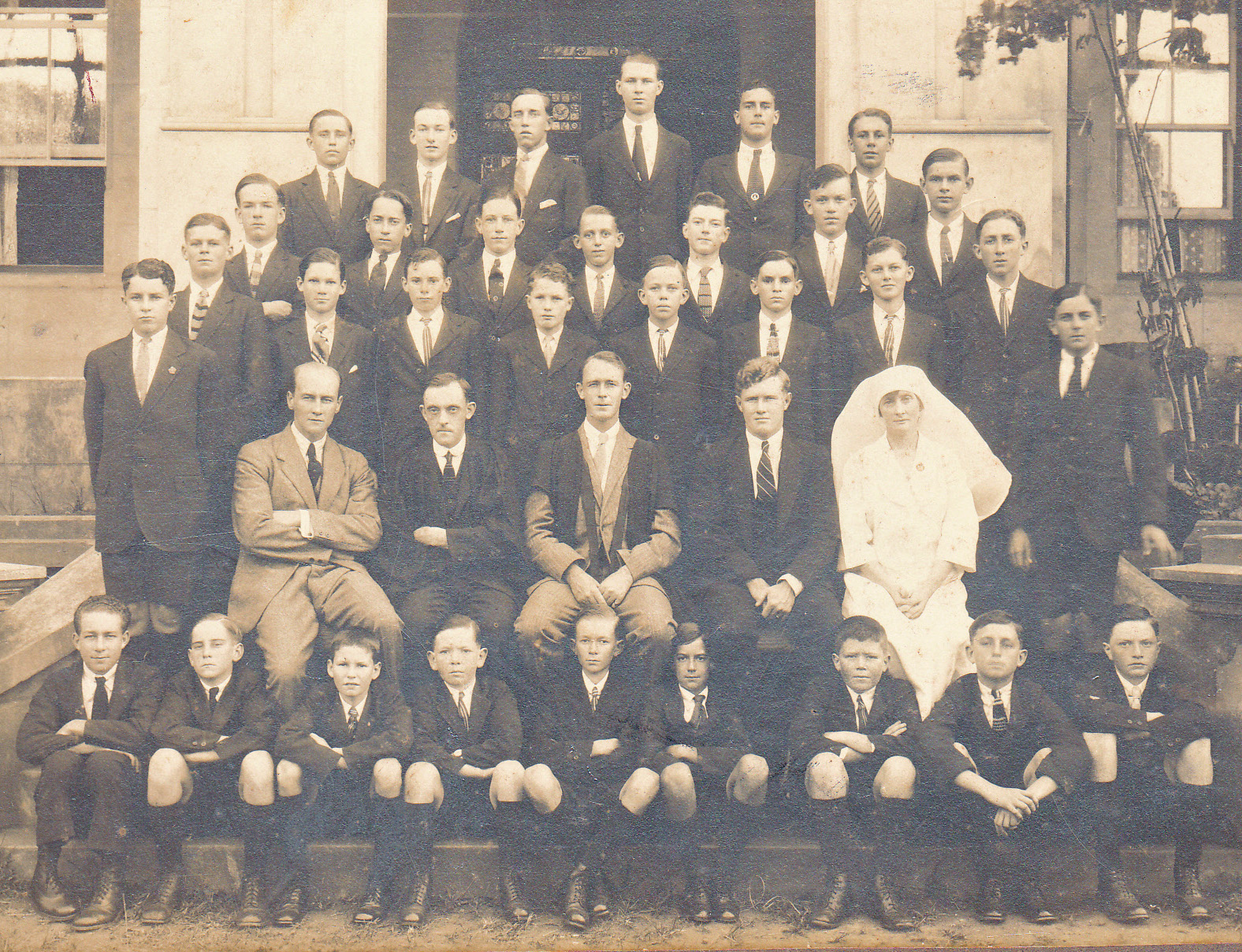 Prior to her arrival, boys needing medical attention had to be taken to Stanger (about 13km away). Once she arrived, however, the everyday health needs of the boys were attended to on campus. She was remembered as a delightful but somewhat formidable personality who did not tolerate malingerers. She appeared rather heartless when it came to lancing boils and liberally dispensed cod liver oil!

One founder pupil, Wilfred Bromiley, remembered her “putting some stitches in my head after I had fallen on the stonework near the showers. Sister had been in the First World War and was therefore prepared to do things which some nurses wouldn’t do.” Sister Edwards herself recalled that “the rugby season is a busy one, for from the word ‘go’ to the end of the season” – a sentiment echoed by her successors over the decades! She continued, “Half of the skin area of the boys seems to have been left on the field. (The field consisted mainly of Sydenham grit, on which the grass refused to grow.).”

She commented on things such as the craze for crystal set radio receivers, remembering that the “lawns and balconies looked like drying grounds, with wire stretched from every available post.” She recalled how the “boys were lulled to sleep with faint noises coming from their crystal sets.” She undoubtedly played an important part in shaping the characters of the boarders in the early years.

After eight years, in 1930, Sister Edwards left Kearsney. One of the schoolmasters wrote, “Boys and staff had a high regard and affection for her although she didn’t give malingerers the time of day and liberally administered Epsom salts.”

She moved to Johannesburg to take charge of the Hope Home – a convalescent home for children housed in another mansion, Pallinghurst, in Westcliff, the former home of Raymond and Hope Schumacher.

However, it was not long before she returned area of what we now call ‘Old Kearsney’ – this time to take up the post of Matron of the Kearsney Hospital, owned by Sir Liege Hulett’s company. In the school magazine of July 1945 it was recorded that Sister Edwards had spent a long weekend at Kearsney (by then on its present campus in Botha’s Hill). She was said to have been “still actively at work at Kearsney Hospital”.

In the December 1945 edition of the Kearsney Chronicle mention was made that Sister Edwards was reported to be retiring from active work at the end of January 1946, after 14 years at Kearsney Hospital. She is said to have retired to Durban for ‘a while’ before returning to Australia for the rest of her life.

The Melbourne Argus of 14 March 1947 announced that Nesta Edwards arrived back home on the Empire Star and commented that “her many Melbourne friends will be delighted”.

In the July 1958 edition of the Kearsney Chronicle of 1958, Jack Reece reported that Sister Edwards was living in Melbourne “in frail health and not very affluent circumstances.” Her address given as “Miss N Edwards. 3 Epsom Street, Carnegie SE 9”. Melbourne.

Less than a year later Sister Ernestine Mabel ‘Nesta’ Edwards died at the age of seventy-six in Ivanhoe, ten kilometres north-east of central Melbourne, on 21 May 1959.