The Three Medals in the Chapel

Observant visitors to the Kearsney College Chapel will notice three framed medals affixed to the northern wall of the nave. These commemorate the feats of three Kearsney heroes.

The oldest of the medals honours Keith George Lewis who was a pupil at Kearsney from 1952 until the end of fifth form in 1956. He played for the 1st XV and captained Gillingham’s swimming team at the interhouse gala. 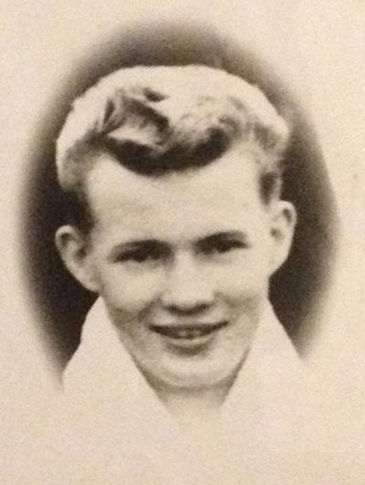 Three and a half years after he left school the South Coast was lashed by unrelenting rain and high winds which resulted in flash floods which left death and considerable destruction in their wake.

On the afternoon of Sunday, 17 May, 1959 Keith and fellow fishing enthusiast, Bill Ryle-Davies, responded to the plight of a Zulu man, named Grammar Mqadi, who had taken refuge from the deadly waters of the swollen Umzumbe River by climbing into the upper branches of a tree. They transported a ski-boat and a single engine by van to the scene.

They launched the craft and managed to get the man on board. However, before they could get back to dry land the engine stalled and the ski-boat capsized. Grammar Mqadi and Bill Ryle-Davies, whose wife was heavily pregnant with their fourth child, disappeared under the water but Keith Lewis managed to cling to the upturned boat.

In an attempt to rescue him, two people on the bridge threw out a rope. However, Keith could not catch hold of it, and the raging floodwaters swept him and the boat under the bridge at great speed never to be seen again.

An article in the South Coast Herald the following Friday concluded with this paragraph: “An ironical twist to this brave rescue attempt is that after the flood had subsided it was established that that the waters had not at any time lapped the tree on which the African was marooned.”

Nonetheless, Keith Lewis and Bill Ryle-Davies had heroically sacrificed their lives whilst attempting to save the life of a fellow man.

Nineteen year old Keith’s selfless bravery was recognised by the posthumous award of a medal – “For Service in the Cause of Humanity” – by the Grand Priory of the Order of the Hospital of St John of Jerusalem in England. Two years later the medal was presented to Kearsney and, after being suitably framed, it was given a place of honour in the College chapel.

The second medal to be found on the chapel wall is the Honoris Crux Gold which was awarded to Paul Burger Whiley who attended Kearsney from 1982 to 1985.

In August 1991 Able Seaman Whiley of the SAS Scorpion was among the South African Navy and South African Air Force personnel who launched a seven-hour mission to rescue the passengers and crew of the MTS Oceanos which had come to grief during a storm off the Wild Coast of the Eastern Cape.

According to Brigadier General Dick Lord, “The Oceanos sailed from East London at 15h30 on 3 August 1991 despite a 40 knot wind and a surge (wave height) of 12 metres. The ship was not in a very good state of repair and was not a new vessel. In fact, it should never have been allowed to sail.

“At about 21h40, the starboard hull plating had been badly damaged and water started pouring into the ship, specifically the generator room, causing a general power failure. The watertight doors were ineffective because the ventilator pipes had been removed during repairs which had never been completed. A Mayday signal was broadcast and, late that night, the passengers were taken on deck where they remained in the freezing wind.”

While helicopters lifted passengers from the deck of the ship and merchant vessels rescued the few who had made it into life boats, naval divers were dispatched amidst very dangerous conditions to search for people who might be trapped in the ship, which was to list and eventually sink by mid-afternoon on the 4 August.

The rescue operation was a complete success. The aircrews of the Puma helicopters were all awarded the Air Force Cross and the navy divers too were decorated.

For his exceptionally courageous actions, Paul Whiley received what was then South Africa’s highest military decoration for ‘outstanding acts of bravery while in extreme danger’. It was only the sixth time ever that the Honoris Crux Gold had been awarded and the only time it was awarded to a member of the South African Navy. He also received numerous other awards including a Special Award for Outstanding Commitment and Human Endeavour from the University of Natal, and a Special Award for International Countenance from the Afrikaans Businessmen’s Society. 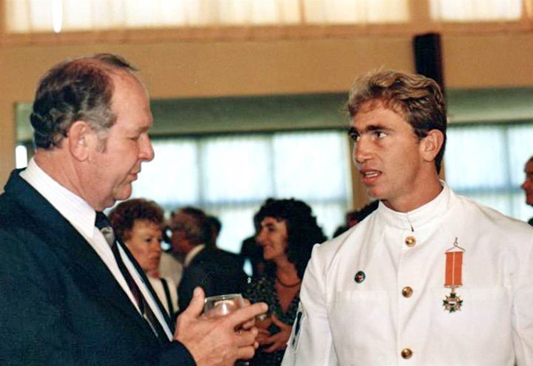 The photograph above shows a man named Gerry, who owed his life to Paul. While being rescued by helicopter, he fell from the harness, leaving his wife, Gerda, screaming hysterically. Paul dived off the port side of the stern of the Oceanos, which was listing perilously 55° to starboard. When he asked those still on board the vessel which way he should swim, they pointed unhelpfully in different directions. He could not see a thing but thought he had a vague idea where Gerry might be. He ended up surfing down a mountainous swell and, miraculously, swam straight into Gerry as if it had all been planned. As he remarked later, “Talk about a lucky break!”

It might be surprising to readers that the third medal affixed to the chapel wall was awarded for performance in a sporting event.

Matthew Terence Moffatt attended Kearsney from 1999 to 2003. In 2001, his Grade 10 year, he and his family holidayed in Zambia and Botswana where Matthew fell ill after contracting what appeared to be a gastric virus. It turned to be the Coxsackie B virus which resulted in massive permanent damage to his heart. His condition deteriorated markedly and it became apparent that his only hope of survival would be to have a heart transplant.

The Kearsney community rallied around. Special prayer days were arranged and many boys spent their tea breaks praying in the chapel. However, there was no sign of a suitable donor heart. By that time his swollen heart had begun to compress surrounding organs and blood circulation had all but ceased.

The original prognosis was that Matthew could expect to little more than a fortnight. He fought valiantly and by mid-December he had survived for three months. However, on Reconciliation Day, his parents were advised to prepare for the worst.

Miraculously at the eleventh hour, a suitable donor heart became available and was flown up from Cape Town. Matthew was almost too weak to undergo surgery. However, the transplant was successfully completed by cardiothoracic surgeon, Dr Robert Kleinloog.

Within less than a month, Matthew was back at school and a thanksgiving service was held in the Kearsney chapel. He matriculated at the end of 2003 together with his heart surgeon’s son, Roscoe Kleinloog.

Although, by his own admission, he was not particularly sporty at school, Matthew went on to compete at the World Transplant Games in Sweden in 2011, where he won a gold medal in the Men’s 50m freestyle event and a bronze medal in the Men’s 100m Breaststroke. Two years later, the games were held in Durban. Matthew again excelled in the pool and achieved third place in both the Men’s Medley Relay and the Men’s Freestyle Relay events.

Believing that none of these achievements would have been possible without the help and support of the people around him, Matthew decided to give all of his medals away.

And so, the bronze medal which he won in the freestyle relay at the World Transplant Games in 2013 has taken pride of place in the Kearsney College chapel alongside the medals won by Keith Lewis and Paul Whiley. 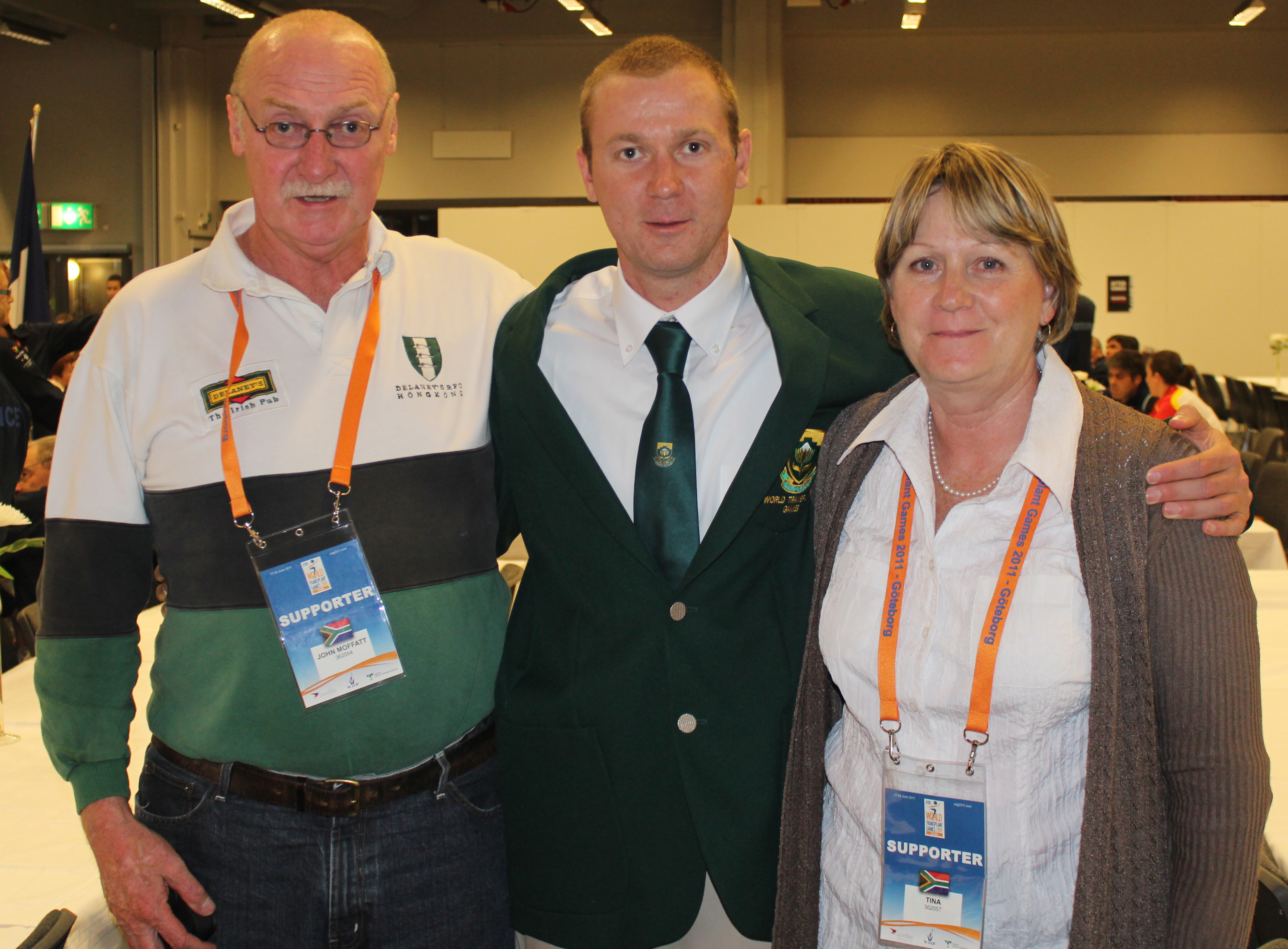