It seems like just the other day that we met up at a 40 year matric reunion having lost contact after some 30 + years.

There were not that many of us from Johannesburg at Kearsney in those days. In fact there were three of us that were particularly close, Nev Forbes Zouty and myself. At that last reunion where we met up I was shocked to hear that Neville had also passed away so prematurely. And now Zouty!

I have so many vivid and beloved memories of Zouty. We were great adversaries in the swimming pool and close team mates on the rugby field. Off the field we lived at one another’s homes. I drive past his old family home in 1st Road Hyde Park almost daily and am constantly reminded of our happy and fun times together.

After school Zouty went to the navy and I to the Air force. On completion of military service we again hooked up and I am once again reminded of late parties at his little apartment in Northcliffe.

Soon thereafter Alewyn (Ollie) followed his lifelong passion and went sailing in Europe and the Caribbean (for +/- 20 years) where after we pretty much lost touch.

At least until such time as we reunited at the class reunion some 4 years back. That hand shake where without any ill intent Ollie almost ripped my arm off. Those fingers were large as bananas and strong. We reminisced as if we had been parted for a couple of days. We spoke of our respective families, work etc.

Zouty was so proud of his daughter (whom I unfortunately never met) but he told me of her successes as a swimmer and particularly in surf activities.

I have just returned from a friend of mines daughter’s wedding in the Midlands where I bumped into Gareth Reeves, another rugby team mate and celebrated delinquent where time has thankfully done little to dampen his adventurous and mischievous spirit. Anyway we stole the occasion to drink a toast to Ollie.

I know Zouty will be as fondly remembered other close friends, Charlie Roach now in Canada and Ralph Back in Australia.

Zouty was always a larger than life character and will always be remembered as such.
RIP my old mate. 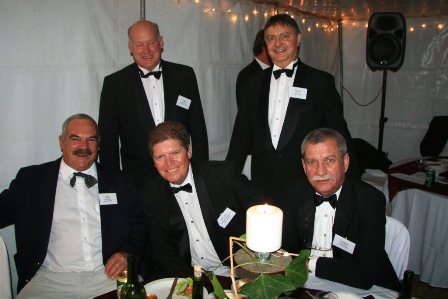 It is with great sadness when you hear of the passing on of old school mates. Tony Morgan was another who recently passed away.

Like Wayne who only had a few Johannesburg school mates, I was the only “Benoni Boy” and lost contact with all over the years. I had visited the school a number of times but the 40th reunion was a memorable occasion and I’ve attached a photo of some of us there that night. With Ollie in the front row are myself and Gordon Campbell. Behind us are Dale Osborne and Steve Gerrish. We’ve all aged but Ollie was still quite a character and a fine time was had by all.

It’s 45 years since we all parted company but it feels like yesterday!

Rest in Peace Ollie and Tony,