The Kearsney College Choir has become synonymous with vibrant, energetic performances and slick, professional productions. With its signature blend of classical, pop and indigenous music, the choir has built up a large international following of appreciative supporters.

The Kearsney choir boasts a long list of accolades, including 15 Gold medals and 7 Silver medals at the World Choir Games (the Olympics for Choirs) between 2000 and 2018. The choir was awarded the “Prize of the City of Vienna” at the 33rd International Youth and Music Festival in Vienna, as well as 1st prizes in various international choral competitions in Hong Kong, Germany and Austria.  At the 7th World Choir Games in Cincinnati, USA (July 2012), the choir was crowned World Champions in Scenic folklore for the third time.  At the World Choir Games in Latvia (2014), the choir won the Scenic Pop category and won the Champion title once again, as well as gold medals for the Folklore and Young Male Choir competitions.

The choir undertakes an international tour every second year. Recent tours include Germany/Netherlands (2004), China/Hong Kong (2006), Austria/Greece (2008), Japan/Taiwan/China (2010) and the USA (2012). In 2014 the choir was invited to represent the African Continent at the “Rhythms of One World” Music Festival at the UN European Headquarters in Geneva, as part of their European tour of Switzerland and Latvia.

In July 2017, the Kearsney College Choir returned from the 10th Orientale Concentus International Choral Festival in Singapore with two Gold medals. The Choir won the Folklore Category with a score of 92.2 (Gold Grade 1). No other Choir earned a Grade 1 Gold in any category at the Festival. In their second category (B2 (Equal voices – Youth), the Choir finished second with a score of 81.3. This earned them a Gold (Grade III).

In November 2017 the Kearsney College Choir who were announced by the international organisation, INTERKULTUR, to be ranked the 12th best choir in the world. What an amazing achievement!

In July 2018 the Choir took part in the 2018 World Choir Games in Tshwane, SA, competing in the Champions Competition – the highest level of competition at the Games. The categories the Choir entered were the Scenic Pop, Scenic Folklore and Music of Spirit and Faith, each requiring various styles of music. The boys rendered energetic performances that left audience members spellbound. Videos of the Choir’s performances went viral; a favourite was We Didn’t Start the Fire, which showed the charisma and stylistic excellence of fusing choreography and pop music. We of proud of the boys of our Choir which won two golds and a silver medal at the Games.

The Choir in our community

The choir is actively involved in community work and raising funds and awareness for Charity organizations, such as the Sunflower Fund, theHillcrest Aids Centre, the Beth Shalom Home for the Elderly, and the Rotary Club of Kloof.

Being a multi-faceted and multi-cultural entity within our College, the choir is an important ambassador for our school, but also for the Zulu Kingdom and South Africa. Our commitment to perform and promote the indigenous music of our country and the rest of the continent is a clear indication of the passion and pride we have for our African heritage.

We are constantly trying to improve our ability to sustain the on-going development of choristers, choral music and performance art and need to offer scholarships and financial aid to talented musicians from all over Africa to take part in our music programme. We believe boys who embrace music and cultural activities during their school careers become balanced, responsible citizens who are tolerant of other ideas and cultures, with a sensitivity towards and appreciation of art and performance for the rest of their lives. The skills developed in a choir (team work, self-discipline, tenacity, co-ordination, linguistic skills, abstract thought) give boys a huge advantage as they tackle the challenges of university and professional life after school.

Kearsney College enjoys a special relationship with Drakensberg Boys Choir, sharing as we do a passion for music and performance and a belief in the importance of music to a boy’s holistic education and his cognitive and social development. Choristers and musicians receive the best possible foundation at Drakensberg Boys’ and their training and performance experience in their senior years at the school are hugely beneficial to their development. A large number of Drakies boys typically join Kearsney in Grade 10, as they want to be part of our world-class choir and have the opportunity to continue to pursue their passion at a top level and display their talent on the world stage. The Drakies boys tend to thrive in the Kearsney environment and the College benefits tremendously from their influence and input. Kearsney believes that the grounding offered at Drakensberg Boys Choir School up to and including Grade 9 provides an ideal foundation for their pupils to join Kearsney at the commencement of Grade 10. Kearsney therefore considers applications from Drakensberg Boys Choir School pupils only from their Grade 10 year. 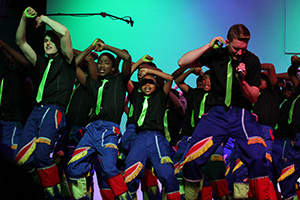 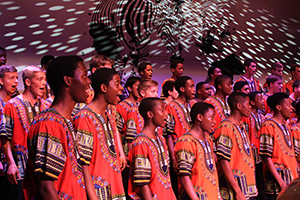 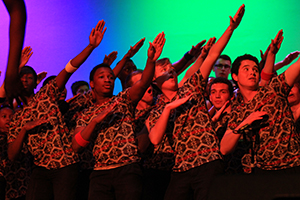 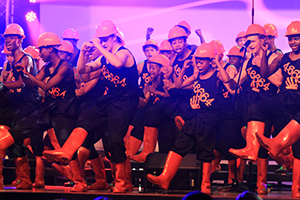 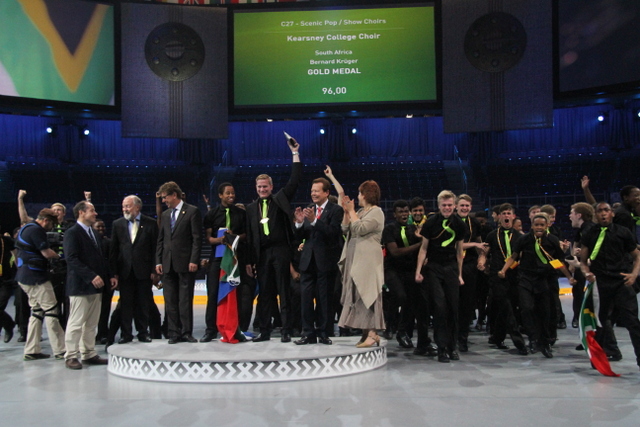 At the World Choir Games in Latvia in 2014, the Kearsney Choir achieved a gold medal in the Champions competition in each of their three categories. They earned gold and achieved Champion status in the Scenic Pop category in which they scored a fabulous 96%. The other two categories in which they achieved gold medals were Scenic Folklore and Young Male Choir. 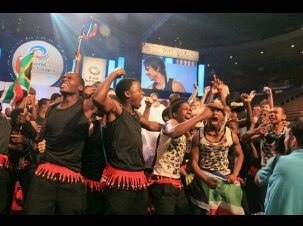 On 14 July 2012, at an awards ceremony at the World Choir Games in Cincinnati, USA, the Kearsney Choir were announced as Champions of the Folklore section. Our Choir scored 90 points, putting them into first place with a gold medal.

Congratulations to the boys who were a crowd favourite with their Folklore performance the preceding night. How proud they must have felt to hear their name announced and then to watch the South African flag being raised for their achievement whilst singing the national anthem?

The Choir took part in two Categories at the World Choir Games. The awards ceremony which included their other category – Music of the Religions – was the preceding day. Here the Choir achieved 82.86%, giving them a gold medal. The Choir with the highest points in this category are also from South Africa – The Stellenberg Girls’ Choir.

For all the details and stories behind the news, photos, videos and more, please visit our Choir Tour blog. http://kearsneychoir2012.blogspot.com