On Nelson Mandela’s birthday, 28 July 2019, 100 young South Africans were chosen for their remarkable drive to succeed in their personal lives and to make a difference in the lives of others and who embody the true spirit of Madiba.

Kearsney College is delighted that three of the 100 achievers – Mpumelelo Mhlongo (25), Zain Bana (24) and Phoka Mchunu (19) are Kearsney Old Boys.

An exceptionally talented all-rounder and leader, Mpumi Mhlongo is a three-time Sportsperson of the Year at the University of Cape Town.  He was awarded the trophy for “perseverance, displaying courage in overcoming difficulties, scholastic achievement, success in sport and leadership” at Kearsney.

He has been recognized as a Young Mandela for his lobbying of the International Paralympic Committee to revise their classification rules and separate blade runners and jumpers from people with lower limb deficiencies. He competed at the 2016 Paralympic Games in two events, and at the 2015 and 2017 World Champs in four events.  He speaks six languages – English, Afrikaans, Xhosa, isiZulu, French and Portuguese.

Zain Bana, who co-founded the NGO Black Young and Gifted (BYG), is passionate about making a difference in people’s lives through leading a variety of business and project-based interactions.

BYG supports South African students of colour who are entering postgraduate studies through funding and mentoring within the Civil Engineering discipline.  Bana was instrumental in it received a million-rand worth of funding from Gautrain, which also resulted in his recognition by UCT.

Phoka Mchunu, Headboy in 2018, founded the Generation We movement.

Taking to heart Madiba’s comment that the youth of today are the leaders of tomorrow, Mchunu established a small but dynamic group of KZN high school pupils from different and diverse backgrounds, from independent and government schools, who strived to inspire and empower one another through sharing their stories. 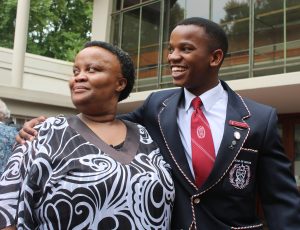 “We, the youth of South Africa, need to find a common thread that binds us together, which will assist in identifying our role in building a united and prosperous country,” he says.

Initiated by News24, the Young Mandelas were chosen from hundreds of nominations to remind South Africans that the characteristics Nelson Mandela embodied – compassion, creativity, leadership, vision and resilience – are still thriving today.

The judges’ message is that, in a country often overwhelmed by daily struggles against crime, corruption, unemployment and abuse, those selected as the 100 Young Mandelas of the Future remind us that there is always a reason to believe in our great nation.