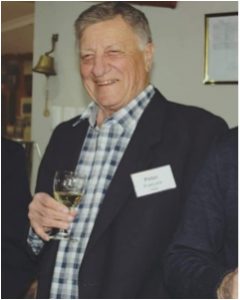 I am delighted to have the chance to fund one of the classrooms in the new Centenary Centre. This has given me the opportunity to honour the driving force behind my attending Kearsney and my future success, my mother.

My father was orphaned at 10 years old; he was the eldest of 5 siblings. My mother was orphaned at 12 years old the eldest of 2 siblings. My father had very little education but he was street wise. At the turn of the last century a 10 year old boy was able to get many odd jobs and by doing so my father was able to earn enough to feed himself and his brothers. He had an immaculate handwriting and a very good head for numbers which allowed him to get a job as a bookmaker’s clerk. At the age of 30 he met my mother–a very bright young lady who realised that a good education was essential to get ahead in the world. At the time she was paying to educate her youngest brother; she was able to do this by taking on odd jobs. Her father had died intestate leaving only a very small fund from which my mother was able to draw small amounts of money, provided it was used for educating her younger brother. My mother and father got married at this time. My father had a 10 year old son from a previous marriage and so my mother took him on and guided him through his education.

My brother Barrie was born after my parents had been married for 10 years and I arrived 3 years later. Barrie and I started our education at Durban Prep. At the time our family was living in 2 rooms in a hotel on the Berea in Durban. My youngest brother was born at this time. Mom continued to advocate to my father that we needed to get a better education. She told my Dad if they gave up one room in the hotel it would save some money which could be put toward sending us two boys to boarding school. So in 1945 Barrie and I ended up at Highbury. Mom at this time learned about Kearsney and being determined that her boys were going to get the best possible education, in her mind that meant Kearsney. Around this time they had a small windfall and my mother insisted that this money be put into a savings account for the education of her 3 children and from her modest salary each month she added to the pot.

After 3 years Barrie was ready for senior school and so he arrived at Kearsney. My parents explained to me that they could only keep 1 child at boarding school at any one time so I returned to Durban going to Clifton Prep. Three years later I was ready for senior school and so I spent 1 year at Glenwood High and the following year arrived at Kearsney in standard eight.

My days at Kearsney were the happiest days of my life. There was one glitch, my parents did not own a motor car and unless they were able to arrange a lift were unable to attend my sporting activities. This had a bright side however, because on free Sundays I was often invited to go out with friends and thus saw many places that I would never otherwise have visited.

After leaving school and finishing my studies at university it was very apparent to me what a fine institution Kearsney was and how fortunate I had been to have spent those years there. I also realise just what a sacrifice my mother had made and what a seriously good woman she was. Singlehandedly from the age of 16 she made sure 5 men in her life received an education, her young brother, her future stepson and her 3 boys.

I retired some years ago from the position of CEO of a company, which was one of the top 100 companies listed on the Johannesburg Stock Exchange, a position I was appointed to at the age of 43 and held for 11 years. I am certain that my years at Kearsney were instrumental in educating me both academically and socially, giving me the sound base which allowed me to fill this leadership position at a young age. I have always wanted to acknowledge this and thus have made a legacy donation to Kearsney and have also made small amounts available from time to time for such activities as sporting tours. Now, I am delighted to have the opportunity to fund one of the classrooms in the new Centenary Centre. This has given me the chance to honour the driving force behind my attending Kearsney and my future success, my mother.